What is a Trapezoid? 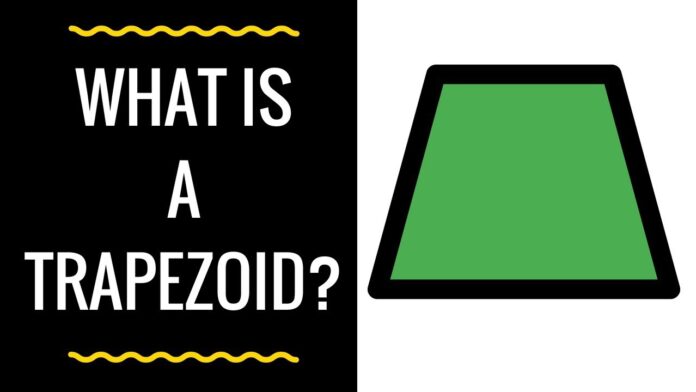 While watching a movie, you must have had popcorn. Have you ever wondered what the shape of the popcorn bucket is? I am asking for a two-dimensional shape, not three dimensional one. Most of you may not be knowing this. It is of trapezoid shape. What is a trapezoid shape? How to find the area of that? Let us learn in detail about the properties of trapezoids.

Listed below are a few properties of a trapezoid:

Area of a Trapezoid

To calculate the area of a trapezoid, the formula is:

Trapezoids have a perimeter equal to their sum of sides. In this case, the perimeter of a trapezoid with sides p, q, r, and s can be written as-

There are three general types of trapezoids:

Trapezoids with adjacent right angles are called right trapezoids. Under the trapezoidal rule, it is used to calculate the area under the curve.

Trapezoids that have neither equal sides nor equal angles are called Scalene trapezoids.

Let us solve some problems on the area and perimeter of a trapezoid.

Example 1: Find the area of a trapezium having parallel sides of lengths 5 and 10 cm and the distance between them is 4 centimeters?

By substituting, we have

Example 2: The area of a trapezium is 400 square meters. The perpendicular distance between the bases is 16 meters and the length of one of its sides is 20 meters. Find the length of the other side?

By substituting, we have