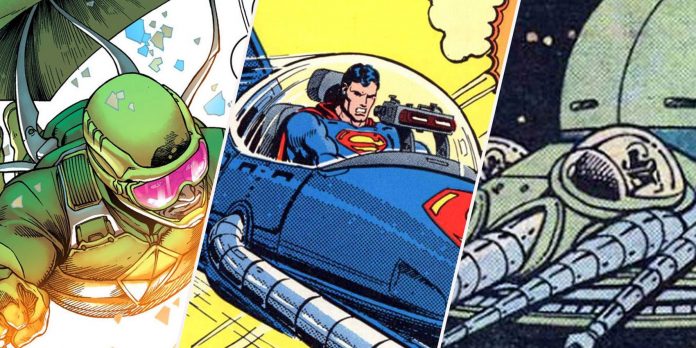 Not all superheroes are capable of flight many of our favorite comic book characters find themselves in need of a mode of transportation thanks to this fact. And we can all be Superman soaring around through the sky or a speedster capable of traveling vast distances in the blink of an eye. So today we are taking a look at one specific mode of transportation for superheroes cars or at least the ones that drive fast. We’re counting down the top 10 fastest superhero cars consider this list of superhero vehicles ranked in terms of speed so with that in mind let’s get to our list and at:

The Battle Shell is owned by the Teenage Mutant Ninja Turtles and it’s a hefty little guy also known as the turtle van or rather the turtle van successor. It’s mainly maintained by Donatello it was constantly upgrading it and had repurposed it initially from a regular vehicle. Now it’s an armored van large enough to carry all of the turtles and their gear comfortably Game Changer. While it has appeared in multiple forms of Ninja Turtles media. This version is most commonly recognized from the animated TV series having been a feature in the show from 2003 to 2009 until. It was destroyed by the Foot Clan the turtles also drive around in something called the turtle Dan as we mentioned earlier. Which is more like a regular oversized van with cannons rather than a completely souped-up version built for assault missions now one was also no earlier TV series moving on to.

The Teen Titans T-car from the animated series so the T-car might not be a vehicle that’s really all that worth marveling at. It does kind of look like a pimped out SUV owned by a dude having a midlife crisis lambs on the side yeah speaks volumes. But it does serve an honorable purpose it’s the thing that gets cyborg to battle. While all of his other teammates have their own more interesting modes of transportation or can fly that being said this thing is fast. It has an onboard computer system that can drive itself with expertise and precision. And it can also turn into a flying car speaking of that brings us to.

Lola from agents of shields Lola is a pretty darn awesome flying car a vehicle that appears in agent shield it is a shield invention a cherry ride 1962 Corvette. Owned by Phil Coulson that was modified on designs and technology developed by Howard Stark. It’s specifically an MCU creation and in that world it appears that it’s actually a perfected version of the flying car that Howard Stark had showed off at the world exposition of tomorrow in the film. Captain America the First Avenger because it’s a shared universe Lola has a few other neat tricks aside from flight. She has flamethrowers to duel machine guns hidden behind the headlights and can drive like a normal car or soar through the air she’s also Phil’s baby.

The Law Master is the armored bike that belongs to Judge Dredd it’s a futuristic heavy duty motorcycle that is equipped with artificial intelligence and as a bunch of weapons to my dad. It has machine guns built-in it carries multiple of droids preferred firearm. The Widow maker and has a slew of communication capabilities that respond to voice commands from within a judge’s helmet. They also contain robot brains which allows the bike to work on their own if necessary or need because it’s the future.

Got another bike for you guy’s moon cycle marc Spector has got some serious Batman vibes I think we can all agree about that Marvel is midnight. Just like the Caped Crusader is a billionaire with a whole lot of disposable income to design and create vehicles and gadgets to better serve his vigilante adventures and while his most impressive vehicle is arguably. The moon copter Specter has also invented his very own motorcycle. Actually called the moon cycle it first appeared inventions at the moon night issue one from 2009. And it made one hell of an entrance Moon Knight dropped a giant metal ball from the sky and after the ball stopped rolling. it cracked open and revealed him inside on top of this bike you can also make a version of it out of Lego if you wanted to which is kind of cool he doesn’t like Lego in.

The Batmobile lands on her list the Batmobile is the oldest vehicle on our list originating from Detective Comics issue 27 in 1939 but with the term technically being introduced in Batman’s mythos in 1941. It was referred to as such in Detective Comics issue 48 it’s also probably the most famous fictional car out there. Even more so than like Optimus Prime everyone knows what ‘mobile is. Its run a lot over the years getting some serious upgrades in the comics. You can watchonlinemovies on MovieHustle without any kind of hurdle. Initially it was described as a specially built high powered auto and the two thousands is when we start to see some of those series upgrades. The 2008 Batmobile owner’s manuals states that it has a five cylinder engine more powerful than turbine jet engines. Capable of achieving up to ten thousand horsepower in 2009 a new model was revealed in Batman & Robin which gave it flight capabilities and 19 different types of projectiles including a sonic blast and a flame retardant non-toxic foam.

This one technically is not a car it is a cloud but here is that for a sec the flying Nimbus is Goku’s mode of travel and Dragon Ball and parts of Dragon Ball Z. It’s essentially a magical yellow cloud that Goku got from Master Roshi and Dragon Ball and it moves at high speeds without using up any kind of energy or fuel and to be honest it probably would have ranked higher on our list in terms of speed. If it wasn’t for the fact that it is a cloud rather than you know a car like our title suggests. But it is a vehicle a mode of transportation that can be controlled by its user despite not having tires or steering wall magic yay returning to a vehicle that has wheels.

The Fantastic Car is a mode of transportation created by Reed Richards and Johnny Storm to serve the Fantastic Four and there have been many different versions of it. Over the years the mk1 was initially referred to as the flying bathtub because of how it looked and it was the first vehicle that the Fantastic Four had. After they’d gone public and the surgeon could carry approximately 1200 pounds and travel up to 60 miles per hour for 200 miles. The ability to break into four separate compartments capable of 30 miles per hour up to a hundred miles. Now the Mach 2 version of the fantastic car is much better designed and maintained by Johnny Storm. This version is a 27-foot Land vehicle aircraft hybrid that can travel at 550 miles per hour. And fun facts in the Fantastic Four rise of the Silver Surfer a film that it probably shouldn’t go watch. If you haven’t seen it the fantastic car appears in the film.

The Hell Cycle is the motorcycle that belongs to ghost riders and it is quite literally a hell cycle it was created by Mephisto to be the steed for the spirit of vengeance. It’s another vehicle on this list that is not powered by traditional fuel it runs thanks to Hellfire and it is not at all affected by or follows the natural laws of physics. It moves at insane speeds it can drive up vertical surfaces it can go across water and has proven to be able to fly at times. It also leaves a trail fire thanks the flames on its wheels with the trail peering more so when the health cycle is moving at fast speeds. Now over the years Johnny Blaze and Dan ketch have had other versions of a hell cycle. One being a school cycle which is basically just a regular bike with customers’ ethics and the other being a bike with flaming wheels and a medallion of power for a gas cap. and an ultra-universes the health cycle has also proven to be wickedly fast too with the version and Ghost Rider 2099 having supercharged turbo thrusters added to it not too shabby and last but not least in.

Lobos fast write 666 tops this list thanks to the fact that it can move at several million kilometers per mile capable of intergalactic travel and can do a plethora of tricks like shoot flames. It also runs on unleaded fuel and it has a 17 liter 3 X turbo engine. It’s one of the most badass bikes in the entirety of the DC universe and it also has a ton of storage for a bike which I guess would be a mega bonus. If you were an intergalactic bounty hunter needing to lug around large firearms and weapons at high speeds comes in handy. I suppose all right there we have it.

adminhttps://movietrp.com
Hi, this is Shri Kant, a blogger, an engineer, and an affiliate marketer. I love writing about topics related to WordPress, blogging, marketing, monetization, and so on.
RELATED ARTICLES
Entertainment