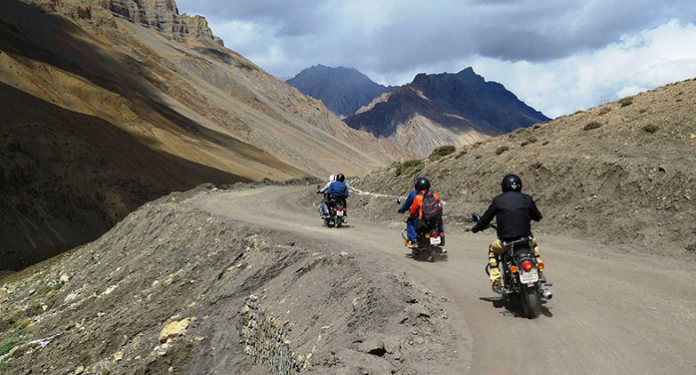 High barren snow-clad mountains, Enriched valleys, Gushing rivers, High Passes, and monasteries are enough to adore this place. The land of Ladakh is just like the gift of the god mankind. It is the land that contains the blessings of Lord Buddha and prayers by monks at the monasteries make it a serene place.  The Ladakh group tour is the best way to have a remarkable experience with friends where memories of this tour remain during your lifetime.

The altitude plays a major role in climatic conditions anywhere so similar as with the Ladakh. Even in summers you can feel the chill winds flowing. In the summers during the daytime you will experience harsh sunlight, in the evenings you will feel the cold and the night goes freezing. The winter time is a very tough time regarding weather conditions. In India, Leh Ladakh region experiences harsh winters. The temperature becomes 0℃ to -20℃. The roads remain blocked and the land area and mountain area is covered with thick snow. As Leh Ladakh is the cold desert area then you will hardly find a tree or any kind of vegetation. People of Ladakh prepare for the winter 3-4 months ago to overcome the hassle of extreme climate.

From May to August there is huge footfall of tourists on this fantastic land.  During this time the roads remained clear and open. The average temperature remains around 15-16℃ and the minimum temperature recorded is 8-9℃. In the summers maximum temperature recorded is 20-21℃ specially in June. It is the best time to have trekking, camping and sightseeing of Leh Ladakh. In late June monsoon rain commences here, which remains till September. So the graph of tourists starts degrading after June.

The post-monsoon session is from September to November. During this time the temperature remains 15℃-20℃. It is again one of the best time to visit Leh Ladakh. It is another pleasant time duration which is suitable for the Leh Ladakh trip. The days remain normal and the nights are cold enough.

The time duration of December to February is the hardest time of Ladakh. Even in the day time you will feel shivering if not wearing proper clothes. The temperature is not maximum than 0℃. The lakes & rivers become frozen wonders and the roads remain inaccessible from both sides that is from Manali and from Srinagar. At this time one fantastic activity you can enjoy here is Chadar Trek on frozen Zanskar River. Many people experience this trek once in a life. It is such an adventurous activity. At the end of the February month the status of activity changes from pause to resume.

How to Reach Ladakh

The main and only airport in the Ladakh area is Kushok Bakul Rimpochee Airport which is situated at the Leh. The altitude of this airport is 10,862 feet/3256 metres above sea level. It is strongly connected with Delhi Airport and the flights are on regular bases. The major flight service providers in this area are Go Air, Spicejet and Jet Airways.

It is all about the info for Ladakh so by referencing it you can plan your Ladakh group trip with your friends and family.